Refugees and asylum seekers both meet the American Immigration Council’s definition of a refugee:

“A person who is unable or unwilling to return to his or her country of nationality because of persecution… on account of race, religion, nationality, membership in a particular social group, or political opinion.”

Refugees and Asylum Seekers: What is the Difference?

Typically, refugees flee in sizable groups to neighboring countries where the UNHCR (United Nations High Commissioner for Refugees) has set up a refugee camp or facilitates resettlement. Refugees often wait for years in a refugee camp until they are granted permanent refugee status. At this point, the UNHCR facilitates their travel to resettle in the United States or another safe country. In the United States, they are immediately eligible for a work permit and are met at the airport by a caseworker. After their long journey, the US immediately places them in a minimally furnished apartment with 3-6 months of resettlement benefits including food stamps, financial assistance, case management, and Medicaid.. Refugees face immense challenges. We acknowledge the incredible hardships presented by refugee resettlement camps and by the trauma that causes one to flee their homes. We are grateful for sister organizations like World Relief and Catholic Charities who serve this population.

According to the UNHCR, “An asylum seeker is someone whose request for refuge has yet to be processed.” Similar to refugees, asylum seekers have experienced unimaginable persecution. Though the cause of fleeing can be very similar, the processes vary greatly. A person seeking asylum must finance their own transportation to safety, which often involves financial and sexual exploitation. They arrive at either an airport on a valid VISA or at a port of entry of a safe country. Upon arrival there is no legal ability to work or social services provided by the federal government. Alone, without the help of a translator or case worker, and often with very limited finances, asylum seekers are faced with the long and arduous legal process of filing for asylum. As a result of a new policy implemented in 2019, an asylum seeker must wait 365 days after filing for asylum, to apply for a work permit in the United States. It can take several more months to years after applying for a work permit, to actually be issued a work permit and social security card. Until a determination is made on an asylum case, which currently takes an average of 906 days, a person seeking asylum remains ineligible for government aid.

DASH exists to stand in this gap. 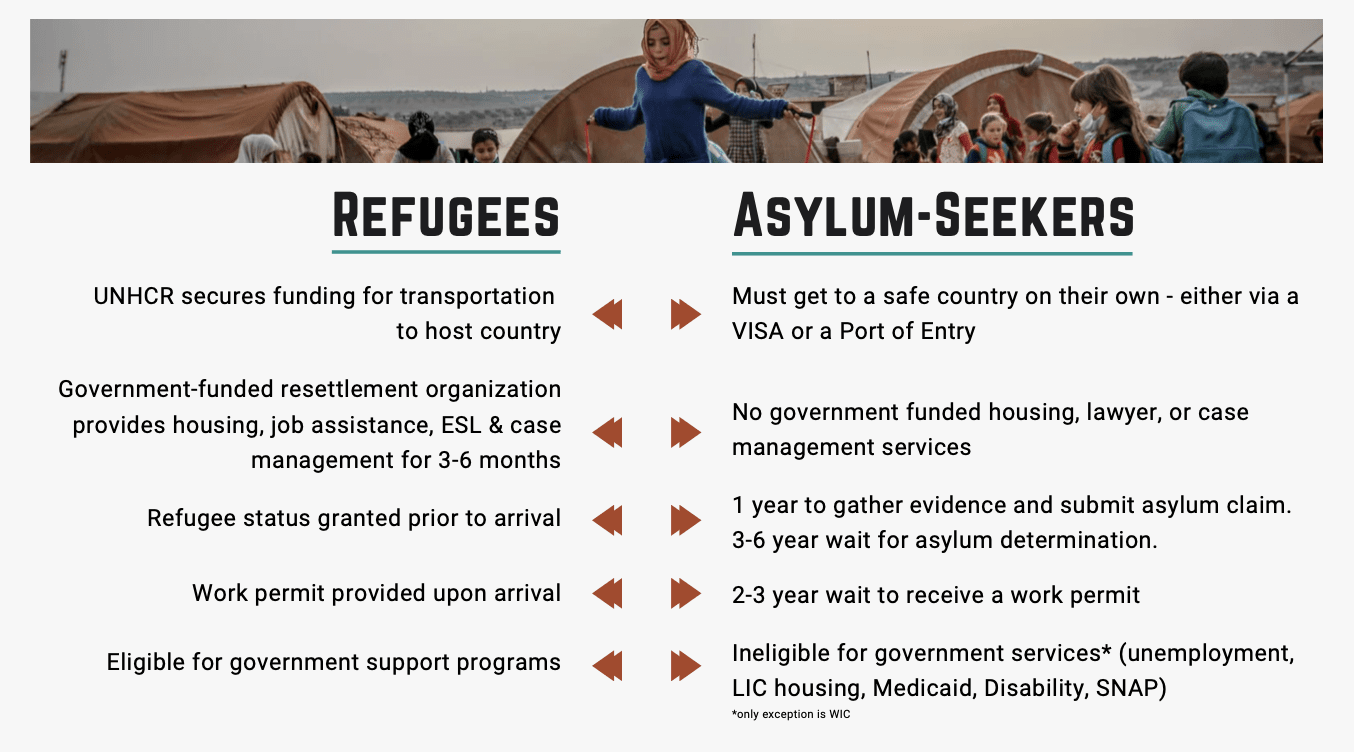