The following testimonies were written by DASH graduates; we are blessed to call each of them our friends. We have prayed, cried, and rejoiced with them as we’ve shared our lives together over the past several years.

Our heart in sharing these stories is not to exploit – all stories have been shared with full consent of the writers. Instead, we hope to communicate the humanity intertwined with this issue and shine light on the atrocities occurring around the world. These are some of the life-threatening reasons people are seeking asylum.

For each of these four examples, there are another 400,000 asylum seekers in our country, many of whom are in similar situations with nowhere to turn.

Can you hear the plea for a generation to rise up?

I grew up in an Orthodox family in (Africa). I would only go to church once per year and the Orthodox services were in a dead language that nobody understands. The Orthodox Christians and churches in my area focused more on saints, traditions, rules, and doing the right thing. I always knew there was a God but I did not have a personal relationship with Him.

Then when I was (a youth) I moved to my older sister’s house. My sister was a Pentecostal believer. I started going to church with her and she started telling me about God. When my sister was teaching me about the Bible, part of me was really beginning to believe in what she was teaching me and I wanted to continue to learn more about the Bible and Jesus.

But in (my country) you are not allowed to be Pentecostal. If the rulers find out, then they put you in jail forever until you say that you won’t follow Jesus this way anymore. The government found out about my sister. They gave her a letter saying that if you continue following Jesus this way then you and your whole family will go to jail, but if you give up believing then they will let everyone go free. We were given until morning to decide. But she didn’t want to give up, and neither did I. So that is why we left the country and hid in (a bordering country). My sister’s family went to (a country in Europe) and got asylum, but we found out the family reunification laws didn’t allow them to bring me. So I fled to the United States when I was 16 to file for asylum.

I was sent to a group foster home and then was placed into the international foster care program. During this time my foster mom did not allow me to go to church, but this was the very reason I fled to America! Asylum cases take a long time, and they don’t allow minor asylum seekers to remain in foster care when they turn 18 if they don’t have asylum yet. I wasn’t sure what I was going to do then, because I still did not have my work permit.​ 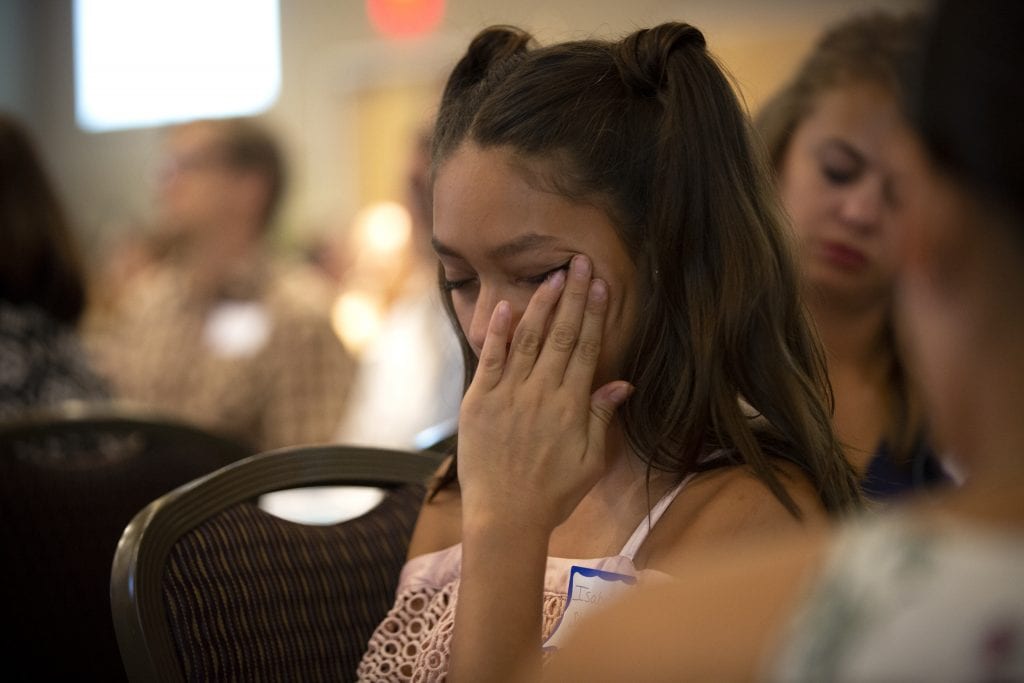 Because of all the sexual abuse, violence, and injustice against women that I saw in my country, I became a women’s rights activist. During law school, I started an organization with a mission to bring women together to teach them what the law says about their rights and to empower women to speak out against sexual violence or discrimination. I began to speak out more and more for their rights and even ran for Congress.

The government employees are one of the greatest offenders of abuses against women. So the government sent soldiers to silence me. When they found me, they attacked me, raped me, and arrested me. They even raped both my mother and sister. If all of us survivors of these injustices keep silent, then things will never change! So even after this, I did not stop speaking out for women’s rights.

From then on I was followed by government soldiers, and I realized that if I stayed in my country, I would be attacked again. And this time they may not leave me alive.

So I decided to flee to America, and I applied for asylum when I arrived.

As an asylum seeker I did not have a work permit, and, at first, I found no organization to help me. I felt lost. I did not have any relationships: no friends and no family members. I didn’t know English. I had no money. I did not have a car or know how to drive. I went from house to house asking for a place to sleep for a few nights. Then I would move on and find a new place.

Still, every single day was like hell. I lost my joy. Many nights I cried myself to sleep. And even during the day, I would take time to cry. I was saying, “God, where are you?! You gave me a promise that you would be with me, but where are you now?”

After two years in the country, I did receive my work permit, but now it has been 6 years since I applied for asylum, and my case is still pending!

Due to safety concerns, we are not able to tell you the detailed stories of LGBTQ+ persecution, but we wanted to mention that we have had several DASH residents from countries in which same-sex relationships are punishable by stoning, assault, or death. When family or friends find out about same-sex relationships, they are often obligated by law or social status to turn the offender over to authorities.

Similar to other asylum seekers’ stories, those persecuted for sexual orientation are forced to flee the country to save their lives. We believe every person holds inherent value and is made in the image of our Creator. We accept and welcome residents from all backgrounds and all walks of life into our program. There is no statement of faith needed for asylum seekers to receive our services.

When I first met Abigale* I remember being struck by both the strength and the softness in her brown face, which bore scars of her story. Framing her right ear, she wore a hearing aid—a constant reminder of the trauma she endured.

Abigale grew up in an African country where, to suppress people into fear, homes were raided and women that she knew and loved were beaten, stripped of their dignity, and raped. Not by out-of-control gangs, but by the very government officials who were supposed to protect the people.

Abigale’s hunger for justice welled up within her as she saw this horror again and again. After obtaining a law degree, her passion led her to make her life mission exposing government officials’ rape of civilians, helping these women to speak out with their stories, and publishing them publicly through a nonprofit she started. Needless to say, the government was not fond of her work. Death threats became commonplace. Abigale continued her work…until that terrible day.

Walking home from work Abigale was stopped by a gang of government vans filled with masked, armed soldiers. While beating her repeatedly in the head with the butts of a gun, causing permanent partial hearing loss, they shouted at her that she must never speak against the government. On the side of a dusty African road, they assaulted her. They left her there mangled and nearly dead.

After a year in recovery, she picked up her justice advocacy work again with new vigor. I will never be able to fathom that sort of bravery. A few months later she received a note stating, “We know where you are, and what you are doing. This time we will not leave you alive.”

Visions of her last encounter terrified her. She knew she had to run. She had to get out of the country if she wanted to live. Abigale first fled to a nearby country. There she received word that the government was still tracking her. She moved to another country, went into hiding, gathered money for a plane ticket, obtained a visitor visa to America, and escaped from the grip of the men who were hunting her.

Once in Texas, with the help of the Human Rights Initiative, Abigale filed for asylum, asking the U.S. government for protected status. She believed that surely in America there would be ample help for women like her who fought against such human rights abuses. She was wrong.

Though “Asylum” is a legal status, it does not give adult asylum seekers resources like food stamps, government housing, free legal representation, or any other benefits available to other refugees and citizens. And asylum seekers cannot obtain a work permit in order to earn their own money and pay for these things themselves. For her first two years in America, Abigale slept on various couches and was left on the verge of homelessness. After searching and finding no resources for people with her immigration status, Abigale was forced to beg for a place to stay and for food from anyone she met.

Human Rights Initiative sent Abigale to DASH and we enrolled her into the program. She asked me, “Where have you been the last two years when I cried myself to sleep so many nights? If it was not for God, I would not have survived.”

Once in the DASH program, Abigale spent months being housed and cared for by a family from The City Church. City Church members helped her with English. When she finally received her work permit, church members helped her find a job at Walmart. They drove her to work, taught her to drive, and helped her find a vehicle of her own. After a few months of saving money, Abigale was ready to launch. City Church members donated everything necessary to fully furnish her apartment. On the day she moved in, Abigale expressed her overwhelming gratitude and exclaimed with laughter, “I am home!”

Abigale has since obtained permanent status, married a kind, well-established man, opened her own hair braiding shop, and tells everyone about how God got her through all of her trials. She called a few weeks ago just to say thank you for our friendship and for DASH for giving her the help that she needed to start her life over in America.

“We have this treasure in jars of clay, to show that the surpassing power belongs to God and not to us. We are afflicted in every way, but not crushed; perplexed, but not driven to despair; persecuted, but not forsaken; struck down, but not destroyed.”

Through her living example, Abigale has taught me the truth of these words. Though we may go through horrible afflictions in this life, if we depend on God, we will not be crushed. Though we may be struck down, God will not allow those who call on him to be destroyed. No matter how far you have fallen or how dark today may look, with God, there is always hope for tomorrow.